I wasn't going to go shopping today....but, there were so many irresistible sales that I dragged my ass out of bed and hit it. I stood in one line at a shop for nearly an hour, my arms drapped with clothing I had gathered after a rocket tour. I almost left when I saw the line snaking around for what seemed like miles. Did I REALLY want another pair of jeans and black cords?? Ones that made my ass look even SMALLER so that I looked like Keith Richards younger , equally as strung out sister!?? Apparently, I did :-/. Then, it was off to lunch at a conveyor belt sushi joint, where little plates of yumminess go around and around and you just grab what you want as it goes by. By this point, I was drained and needed sustenance. This is not exactly fine dining, but I was so famished that I would have eaten a horse (which I did once, accidentally, in France). The place was SO cold, like a meat locker, so I shoveled down the food and ran outside to thaw out. My fingertips were completely numb and I felt like I was back at college, in Colorado, in the Winter (where I really DID get frostbite after tooling around on my scooter without gloves). I thought I should make something, so I watched "An Education" on my laptop while I made some fish to put on scales. GREAT film!! The lead actress is astonishing! Anyway, I feel like crap now, so it may be awhile before I update my blog, but here are pics of the conveyor belt sushi and my fish on scales. 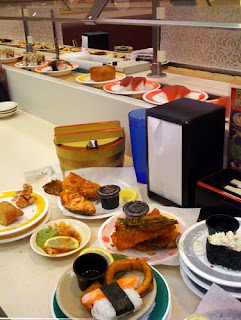 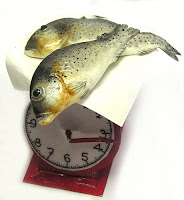 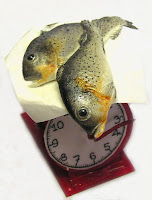