Well, I'm still not quite feeling 100% "normal" (is there such a thing!?), due to extreme anemia, lethargy, and overall fartiness, so my blogging has been lackluster, and most of my time has been consumed with trying to fill orders and crank out the goods, while staying conscious. BUT, I am getting better, really! I'm continuing with the Mexican theme, hence the Tamales, and satisfying my penchant for the grotesque with bloody fish heads.


Making these fish heads reminded me of hanging out with my Chinese grandpa. He was a hardcore fisherman (he ate stuff right out of the ocean, no prep or cooking required), and throughout my early teens, we were attached at the hip. Well, with him and all his fishing buddies, that is. He used to make these crabbing nets. They were round, with the net in the middle, and strings to attach fish heads as bait, and a long string to pull them back in. We would go down to the canal, toss the nets into the water, then wait until the crabs went for the bloody heads. With a quick yank of the string, they were ours and into the bucket they went. He cooked me everything we caught, and it was pure heaven. Fried fish eyes? HELL YES!! The back of the crab with all that greenish stuff?? Still my favorite part- you can keep the legs and everything else. I also went with him and his buddies to "lay net" in the ocean, which entailed a group of guys swimming out with a giant net. They would lay the net, which covered a wide expanse, then, a day or so later, we would go back and pull in the haul. Lobsters, lots of fish, crabs....all kinds of goodies! One day, I asked my grandpa why they ocassionally slapped the surface of the water. He told me that they were doing that to chase away the Hammerhead and Tiger Sharks. WHAT???????? I climbed into the giant inner tube where they held the big net and refused to swim along side them ever again. Thinking back, this didn't make any sense. Wouldn't making all that commotion ATTRACT the sharks as opposed to scare them off??? I never found out, but my gramps was notorious for saying things to freak people out. In fact, for the longest time, I believed that he ate chicken shit as a child, like he told me (among other things).

When my parents bought him a proper fishing boat, I still went out with him, even though I was miserable. I would start out all gung ho, then gradually wilt under the weight of extreme nausea and exhaust fumes from the engine. He would kill the engine when we were out far enough, and just sit there, with the boat going up and down. I would hang off the side of the boat, barfing profusely. Maybe this was like "chum" for the fish? EEEEW!!!!!! Anyway, my grandpa was a real character, a maverick, a rebel, and a one of a kind. He taught me to eat things most people would turn their noses up at, and I love him for that ;-). 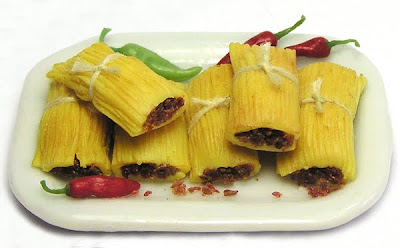 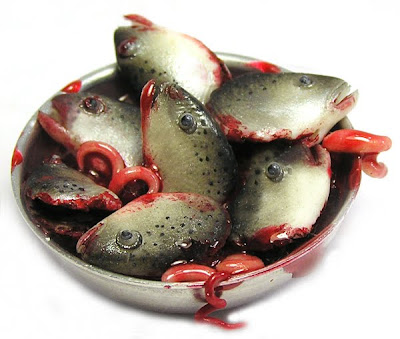